This was our worst trip ever!

One of the hazards of planning a trip to Adak is the uncertainty of the flights. We had learned from our previous trip that eating in the restaurant on Adak was expensive and not convenient, so on this trip we decided to fly into Anchorage the day before the Adak flight and purchase food to take with us. Well, that worked well, but when we got to the Anchorage Airport on Thursday, 9/7, we were informed that the flight to Adak was cancelled due to weather and we were rebooked on the flight for Sunday (9/10)!

There are only two flights a week to Adak – Sunday and Thursday. If one is cancelled, they don’t reschedule it for the following day. Instead, you have to wait for the next flight 3 or 4 days later.

Thankfully, we had planned for this possibility and had brought along the George West’s Birder’s Guide to Alaska. So we spent a few days birding around Anchorage and down to Seward and back. We added to our Alaska list and saw some of the gorgeous scenery.

We finally arrived on Adak on Sunday. We had planned a ten-day trip, but were now limited to seven.

Although a strong storm had passed through a few days earlier, the weather was sunny and pleasant – not good for rarities!

We were the only birders on the island except for an engineer who flew out with us for work-related stuff, but spent a little time birding as well.

The balmy, sunny weather the entire week made for getting great scenery photographs, but brought in no Asian birds. The only birds of note were a couple of Sharp-tailed Sandpipers in Contractor’s Camp Marsh (and they weren’t even lifers for us). However, they were very cooperative and I got great photos (with my new lens…).

There were probably other goodies on the island, but we were still novices on how best to bird the island and were still finding our way around.

On Tuesday (9/12), we went out to the Loran Station to do a seawatch. As I was scanning the sea, I saw two birds flying low over the water, coming towards us directly from the north. I quickly identified them as falcons, but could not tell which species. They flew in towards us and past us and headed inland. They were Gyrfalcons – obviously migrating. We spent some more time seawatching and then headed back. About a mile inland  — where some old utility poles were still standing — we found the Gyrs. 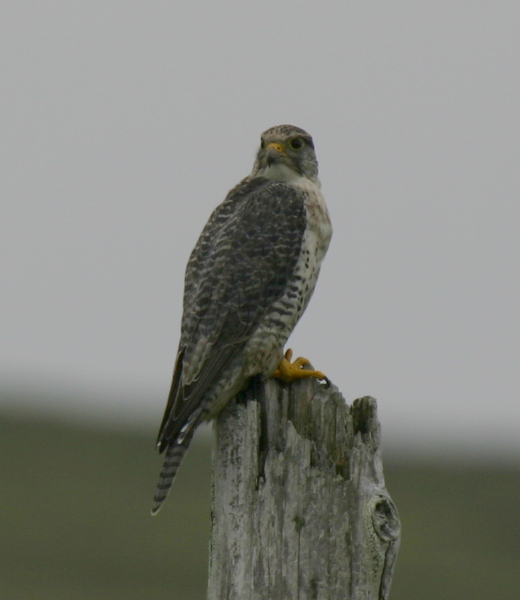 That was about it for excitement on this trip.

We ended up with only 36 species!!

However, we were not discouraged and vowed to return.