However, at the Kuluk Bay overlook on Bayshore Highway, we watched a Gyrfalcon attempting to catch a Black-legged Kittiwake out over the bay. The Gyr would fly up, dive down, miss, and repeat. This lasted at least 5 minutes, probably more. The Kittiwake was too nimble and the Gyr finally gave up and continued on its way.

At the Seawall, a couple of Horned Grebes came close enough to photograph. 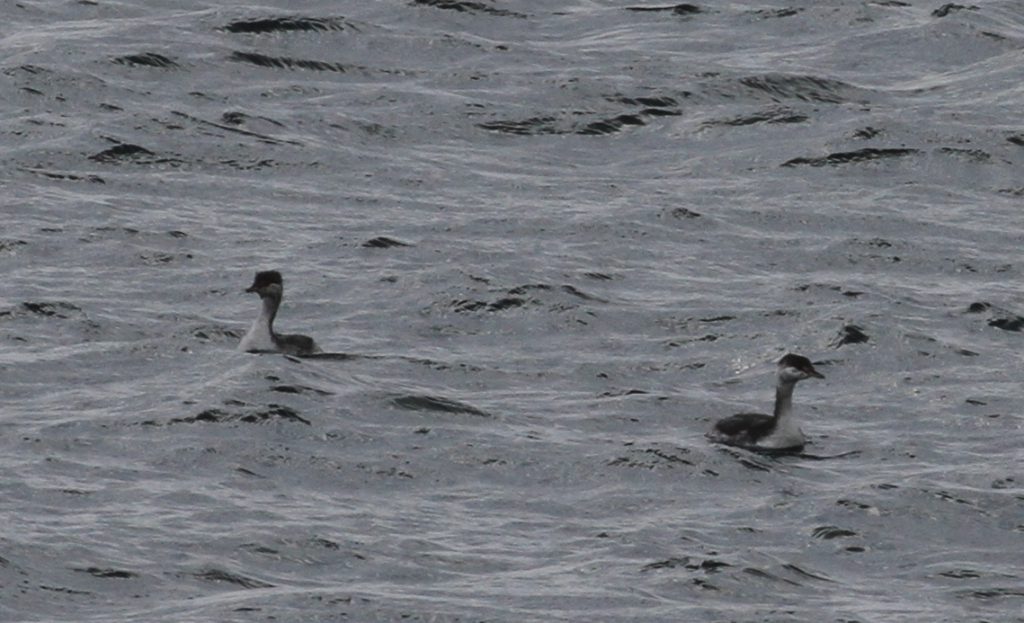 We finish the trip with 55 species — one shy of our September average.

We had one lifer and several semi-lifers.

The next-best bird was the pair of Gray-tailed Tarttlers. These were only our second record for this species since we have been coming to Adak.

The Blackpoll Warbler, while not a lifer (or even close!) was still significant, as it was the first record for all of the Aleutians.

There were numerous bird behavior interactions to entertain us as well.

In 2005, ’06, ’08, ’09, and ’10, we visited Adak only once each year. All of the rest, we visited both spring and fall. For those years, the combined year’s list has averaged 83. Our best year was 2007, which had a terrific spring (Spot-billed Duck, Smew, Terek Sandpiper, among others) and fall (Marsh Sandpiper, Gray-tailed Tattler, Lesser Sand-plover, Eye-browed Thrush, Siberian Rubythroat, etc.) and produced 91 species.

This year, we had 89. mostly due to a terrific Spring trip. Amazingly, we missed Emperor Goose and Sanderling on both trips this year — a first!

We are already planning for next year.

Sweeper Cove and channel were pretty empty of birds. This was the highest tide we’ve had this trip, leaving little shorebird-attractive shoreline along the creek. The strong wind and rain didn’t help, either.

After checking the Warbler Willows, we drove out to Lake Andrew. As we drove along the shore, a Northern Harrier popped up and, with a 30 mph tailwind, quickly disappeared ahead of us. It was a female, but we never got close enough or photos to determine if it was the American or Eurasian race. The one we had in September 2009 was American.

After going back and forth on the road hoping the bird would circle back, we spotted three Eurasian Wigeon on the lake. So far this year, the wigeon have all stayed at a distance not suitable for photography, but these were much closer — albeit in lousy light conditions. 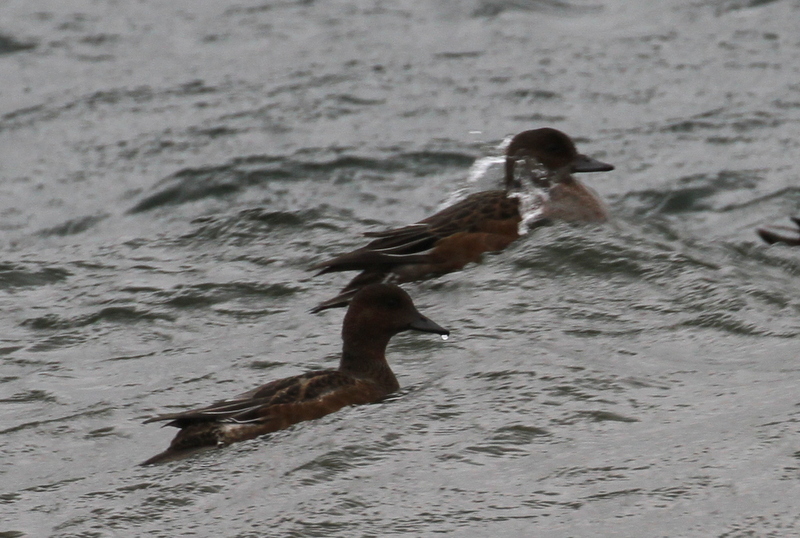 The wind was howling out at the Seawall, but the waves were smaller than yesterday. We finally found a Common Loon for the triplist. We also saw a parade of Albatrosses, just visible with binoculars, but just far enough out and with poor visibility as to make species identification impossible. We counted at least 8, and if we had scanned some more, we probably could have counted more.

Nothing else of note today. We ended earlier than usual because the weather was getting worse.

We leave tomorrow at 6 pm (Adak time) and expect to arrive home Friday around 5 pm est.

The final wrap-up post will be posted Saturday morning (unless the Anhinga at Tinicum is still being seen and we run down to get it!).