Still no Asian birds at any of the feeders, but activity has built up at each one.

We had a Wood Sandpiper at the Airport Ditch this morning.

At the marsh, as we were talking with Wendy and John (part of Cassity’s group), snipe — presumably of both Wilson’s and Common — were performing overhead!

At the Adak National Forest, as I walked up to refill the feeder, a Short-eared Owl flew out and quickly disappeared down the hill.

At the north end of Clam Lagoon, the terns were gathered on the rocks like yesterday, but this time there were both Arctic and Aleutian. However, they were segregated. The Arctics to he right and the Aleutians to the left. 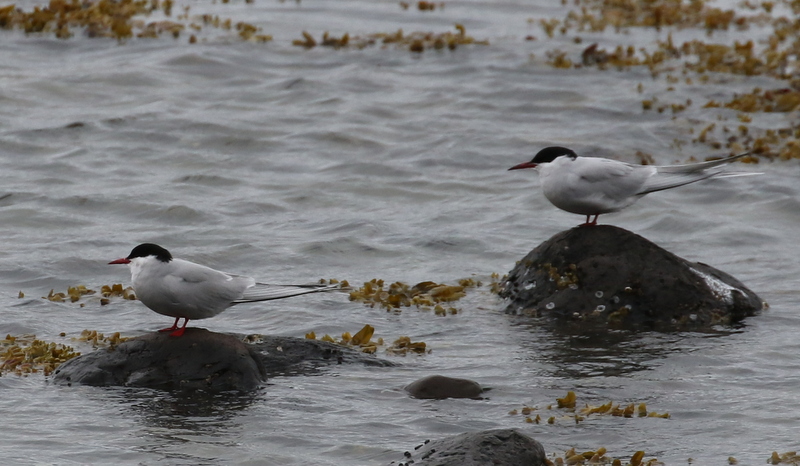 When we got around to the East Side Ponds, there was a flock of five Northern Shovelers! We have had Shovelers on only 10 of our 24 trips. The most we ever had was 6 back in May 2014. We usually have only one or two, so this was an unusual number.

Shortly after passing Lake Shirley, another Short-eared Owl flushed from beside the road and – as usual – quickly disappeared around the hillside. Two in one day! Not only have we never had two in one day on Adak, we have never had two sightings in one trip! So that was nice.

At Candlestick Bridge, a flock of 4 Black Oystercatchers flew by.

Earlier, when we had stopped at the Palisades Overlook, I saw a large flock of dark waterfowl way over near the shore east of Candlestick Bridge. They were too far away to identify, so when we got to the bridge, I walked down to the beach, around the bend and far enough down the shoreline so I could scope them. They were mostly Harlequins, but there were also 8 Black Scoters and 2 White-winged Scoters. As I said yesterday, most of the migrant waterfowl has left, so any lingering birds like these help the trip list.

As we were going around the lagoon, we ran into Peder’s group who informed us they had 8 Pacific Golden-Plovers and the Pectoral Sandpiper at the marsh this morning. When we were there earlier, the other group was walking the marsh, so the plovers apparently had moved. When we got back there this afternoon, we found 7 of the plovers and the pectoral in the usual location.

After a break at the house and refueling ($5.91/gal — up $.10 from last year, but still a bargain compared to $6.87 a few years ago!) the car (a Ford Expedition, by the way), we headed down to the Hilltop Quarry in search of Snow Bunting for the trip. We were successful.

So we are up to 43 for the trip list. No new Adak birds or lifers so far.