We started seeing birds at our feeders this morning. Mostly Gray-crowned Rosy Finches, but that’s a start.

At the Airport Ponds, a group of Aleutian Terns were feeding. This is a favorite spot for them. Up at Contractor’s Camp Marsh, we found three Pacific Golden-Plovers at their usual spot. Although we have seen these plovers in many locations around the island, no other spot is as dependable as this one — the eastern edge of the marsh area at the northeast quadrant, one road west of the main road bordering the marsh. 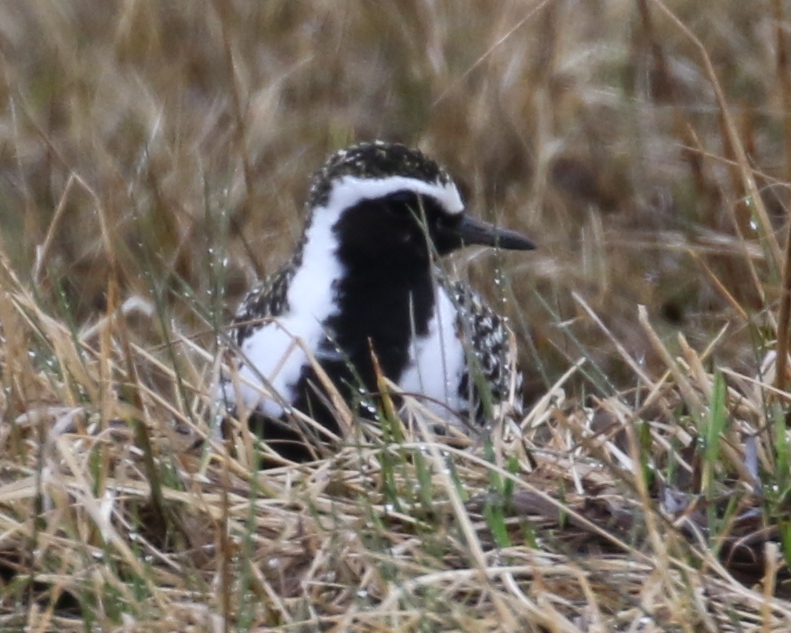 We went to Lake Andrew and had the usual suspects, but also had a little bit of drama.

As we were driving back along the edge of the lake, we saw an eagle hovering over an adjacent pond with several ducks not thrilled with the idea. As the waterfowl took off, the eagle pursued a teal out over Lake Andrew, making several unsuccessful passes at it. However, the duck decided to try putting down in he water to try to avoid the eagle — NOT a great idea!

The eagle again swooped in, forcing the teal to dive to escape. When the teal surfaced it was attacked again by the eagle — which was hovering overhead like an Osprey — and again had to dive to escape. This time it stayed under longer, but eventually had to come up, and this time the eagle landed right on it, held it underwater until it died, and then flew off to the shoreline with it for a tasty meal. Unlike the young eagle we saw a few years ago that landed in the water while trying to catch a fish, and then couldn’t figure out how to take off, and then ignominiously paddled with its wings to shore, this bird had no trouble lifting straight up out of the water — teal in hand.

We headed up to Clam Lagoon and, as we drove around the west side, we ran into the Peder Svingen group (the other is the Kris Cassity group). They told us they saw a Common Merganser on the lake between Shotgun Lake and Lake Andrew. They weren’t sure if it were the Asian variety, so we headed up there to take a look. By the time we got there, the bird had flown. However, as we continued the drive towards Lake Andrew, we spotted a Wood Sandpiper in a small wetland visible from the road. 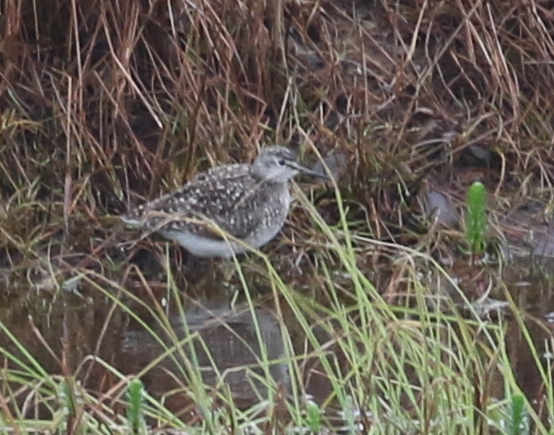 The other groups and the Johnny and Shari Powell (who were here last week) have had several so far.

At the northwest corner of Clam Lagoon, there were several cormorants sitting on the pilings. Usually, these would be pelagic, but today a Red-faced joined them. 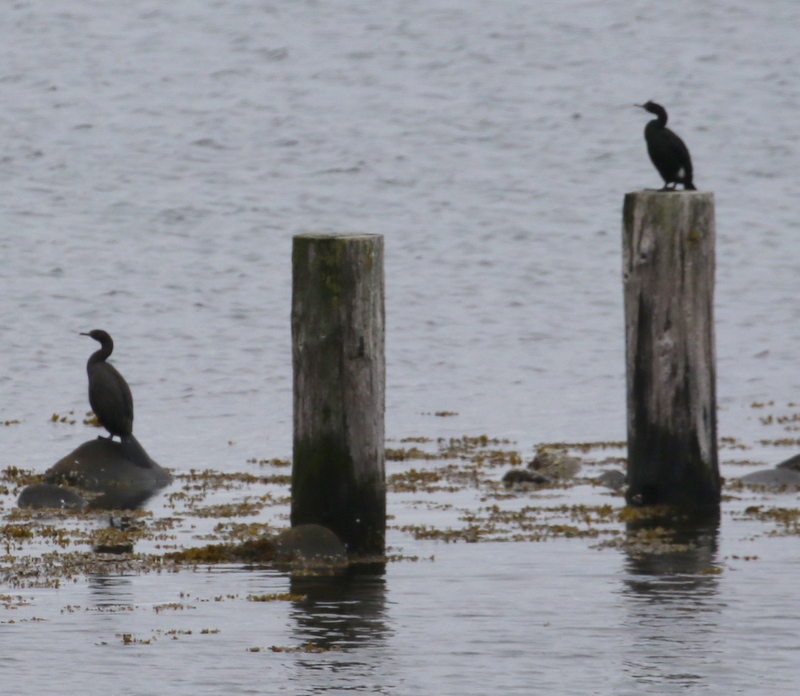 As we continued around the lagoon, a bunch of Arctic Terns were sitting on the rocks near shore. As I stepped outside the car to get photos, they rose up and flew overhead, calling and dancing in the air. 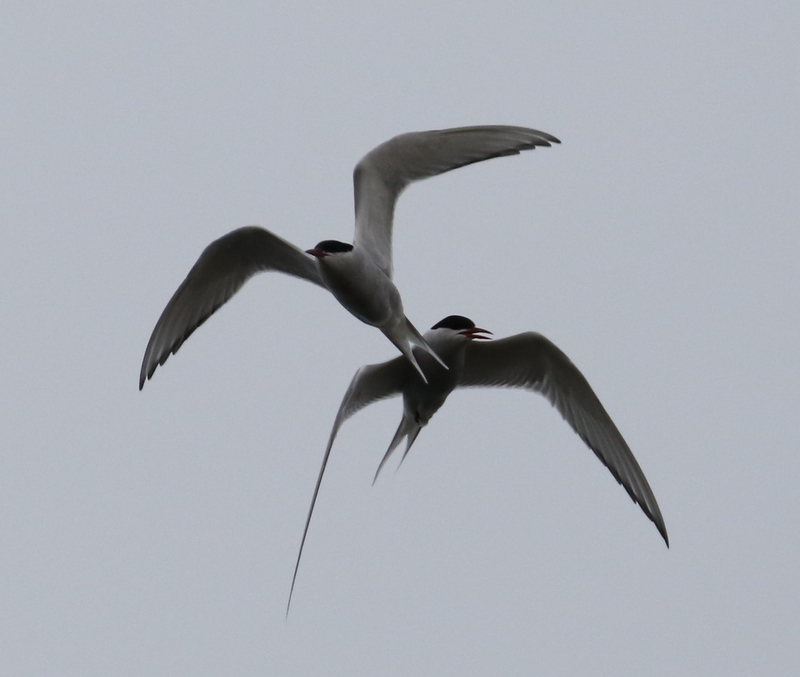 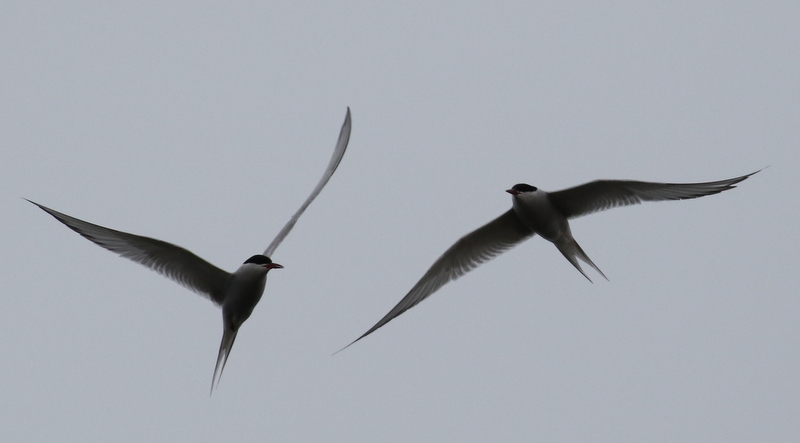 There were half-a-dozen or so Pacific Loons off the Seawall and one Red-throated Loon.

Back around on the west side, we found a pair of Northern Shovelers — not a rare bird, but uncommon on Adak.

We drove down to Contractors Camp Marsh, where we met Kris Cassity’s group. We told them where we had seen the plovers earlier and they headed over there. We joined them shortly, and while scanning, I spotted a shorebird in the grasses that stumped me. I wasn’t sure of its size (there were only grasses around it, not something easily sizeable like a log or piece of trash!). However, it seemed like a medium-sized shorebird. I alerted the other birders, tried to direct them to the bird — which was difficult as there were no landmarks nearby.

I took several photos and, when I looked at them, the bill and overall impression made me think Least Sandpiper — a very uncommon species up here. But I wasn’t convinced. When we got back to the house, I sent photos to Isaac and he responded that it was in fact a Pectoral Sandpiper. We see many Pectorals here each fall, but they are unusual in spring. 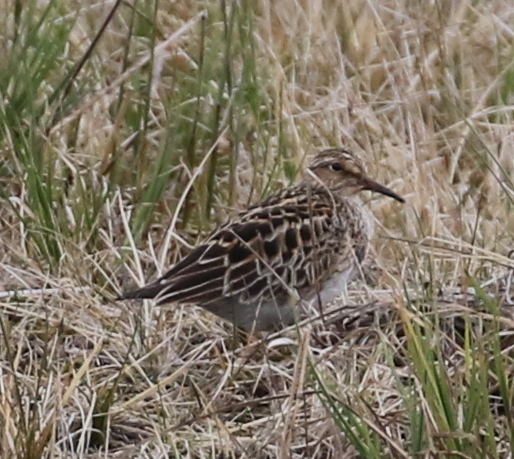 That only worsened my confusion — an unexpected species…

We headed into town for a quick break and then went back up to the marsh. Kris’s group was still there. After chatting a bit, we parted ways, but a minute later, he radioed that they had a swan flying in. It landed not fifty yards away. It was a Tundra. 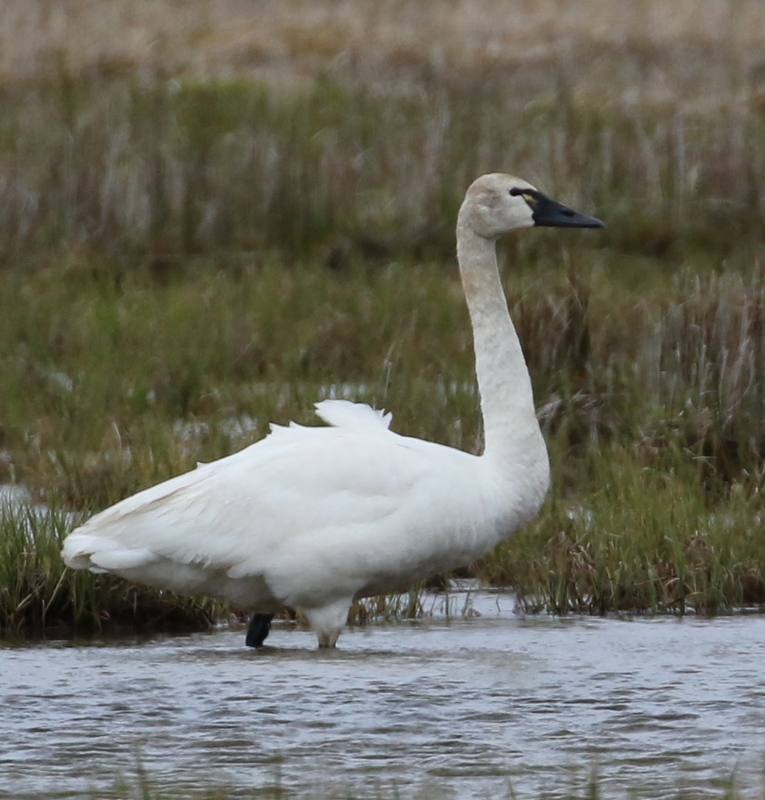 We went back towards town and went down to the Airport Ditch to look for shorebirds. There were no shorebirds, but we did find a Green-winged Teal mixed in with the Common Teal. 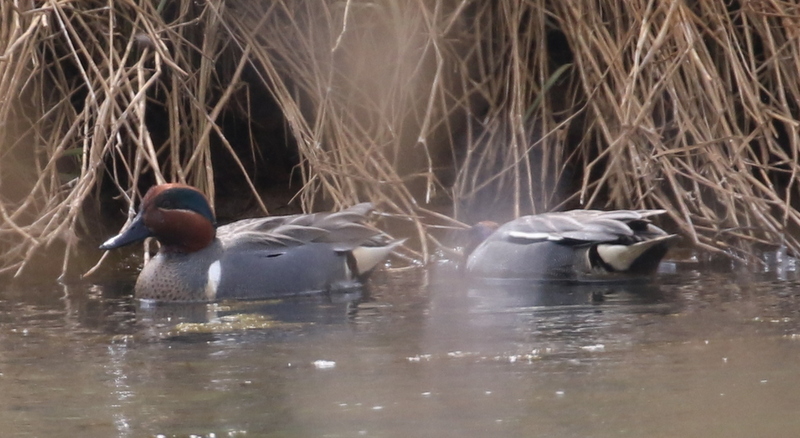 Our trip list is a paltry 39, which is to be expected this late in the month. Most of the waterfowl are gone, and they usually help pad the list.

We are getting northwest winds right now, and although we prefer southwest winds in spring, we will take anything with a westward bent!