Just as we were going out, Jon called to say the Sandhill Cranes were down near the Airport Ditch. We went down there, but the cranes were gone.

At Sweeper Cove we had another Horned Puffin. 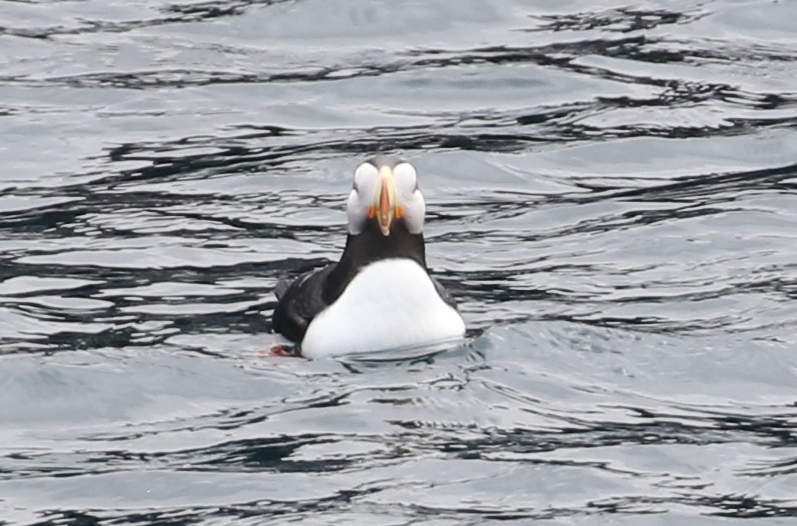 We went up to Clam Lagoon, but found no shorebirds on the peninsula. The flats had few birds, also.

On flight day, we tend to stay near town in case something goes wrong with the truck. The Brambling was at Seal Drive Feeder and Jon and Jim reported having two there later.

The Temminck’s Stint was still here.

Late in the afternoon, we were just driving towards town from Landing Lights when Jon called to say they just had two Tundra Bean Geese flying over and headed our way from town. We looked up and there they were, coming in for a landing on the other side of the airport runway. They disappeared over a little rise.

We drove up to the Airport Escarpment where we could see the runway and spotted them. The distance and heat waves prevented nice photos, but here is one anyway. 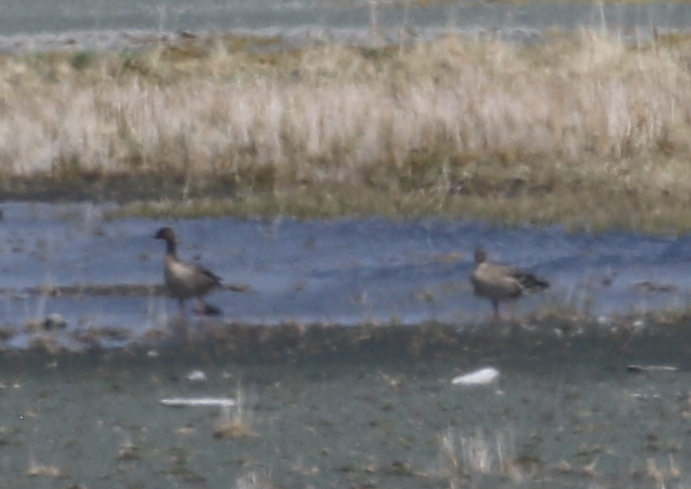 That put our trip list at 80! One shy of our May record.

In summary, the trip was very good.

It started off with a bang — the Great Egret — but quickly got bogged down by east winds. However, the winds shifted for the second week and we did much better.

We had one Lifer — Spotted Redshank

The Semi was a new bird for Adak.

Other birds seen by other birders while we were there, but missed by us, include: Short-eared Owl, Peregrine Falcon, Red-necked Stint, Sandhill Crane, and Dunlin.

THE bird of the trip was, of course, the Spotted Redshank. Not a bird we really had expectations of.

We will be back in September.

PS: There was an article in the recent ABA publication Birder’s Guide to Travel on Adak, etc. There have been some changes (such as flight schedules) since that piece was put together. See my Guide to Birding Adak, Alaska at franklinhaas.com for current information.