Well, the trip started with a bang, but ended with a whimper.

But this is why we always spend two weeks. Sometimes the second week is the better, sometimes the middle of the trip, and sometimes the beginning. You never can predict what the weather will do (or bring).

I mentioned in an earlier post the flash of the white wings of the Rock Ptarmigan. Here is a photo of that, albeit from the rear… 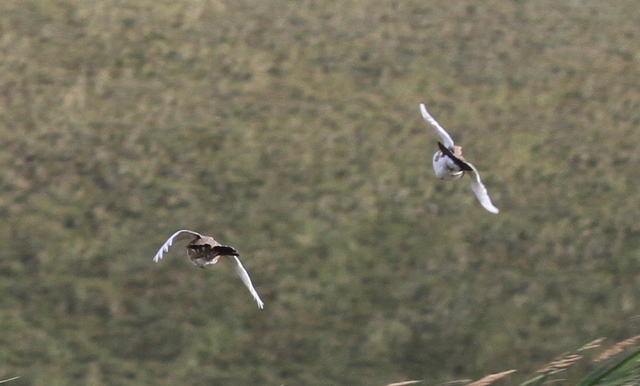 As we took off, I got a few new photos of Clam Lagoon. In this photo, Clam lagoon is in the center with the flats at the left. You can see the peninsula (center left). Lake Shirley is top right (in the sunshine). The seawall extends through the top right quadrant. 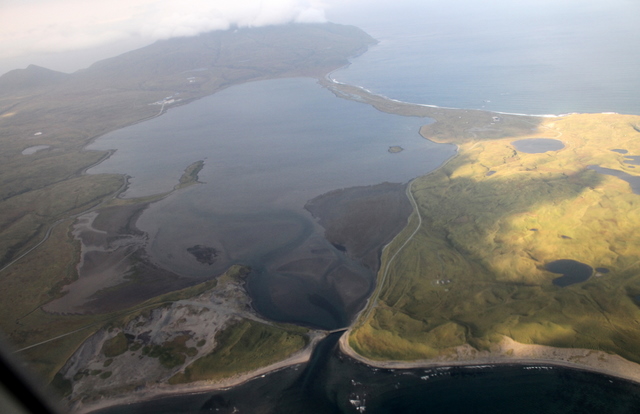 We got home a little late. The Chicago-Philly flight was delayed about 45 minutes and there was traffic backed up on the “Blue Route” which stretched out the drive home by an extra half-hour or so.

We hope you enjoyed this blog of our trip. We hope to do it again.

Overall, it was a good trip. We’ll be back…

Although we did not get any new birds today, we did get some good photos.

We had another Vega Gull. This one a first-year bird. 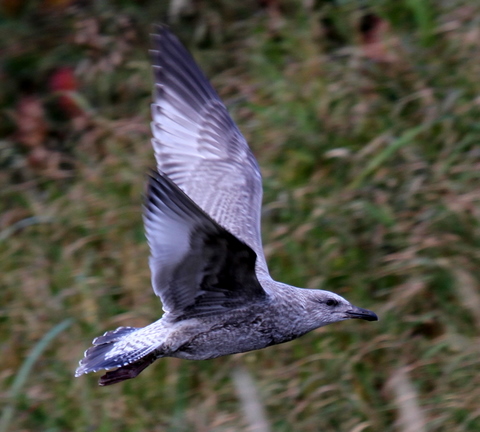 The Sharp-tailed Sandpipers in the Clam Lagoon marsh have been uncooperative up til now. However, today they didn’t mind Frank’s presence and he got a few good shots, including a photo of a Pectoral and Sharp-tailed together! 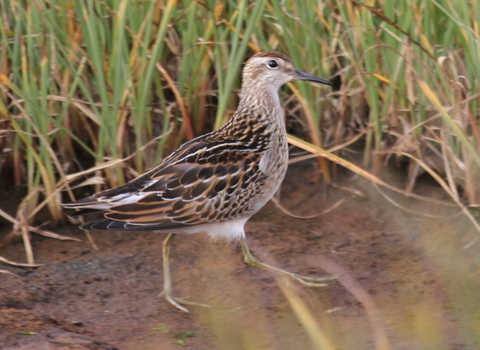 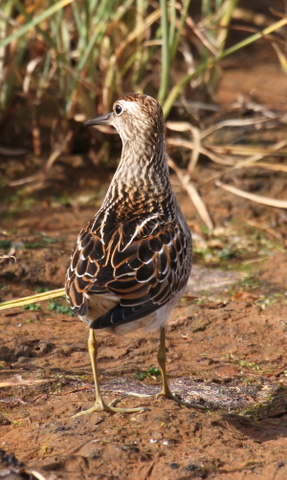 The verdict is still out on Isaac’s mystery shorebird. However, we don’t think it is a Broad-billed. It could be just another Dunlin, as they are highly variable in bill shape and length (however, we are certainly no experts!).

We will be leaving Adak at 6 pm Sunday and be on airplanes and in airports for the next 16 hours or so, arriving in Philly around 2:15 pm Monday (we hope).

We will not be updating the blog until Monday evening (if awake). We hope it has news of a good last-day bird!

A change in the weather!

Today was overcast, rainy, and winds from the southeast to east.

The only new trip bird was White-winged Scoter. However, waterfowl continue to increase. We are now up to ten Eurasian Wigeon and more Mallards and Pintail have shown up.

The salmon run is about over. A few live fish can still be seen in the streams, but most are dead and the shorelines are littered with fishbones left by the Ravens, Eagles, and Gulls. Here is a flock of ravens at one of the creek outlets on Clam Lagoon waiting for the remaining salmon. 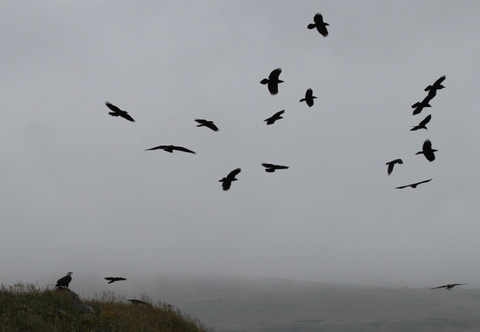 Isaac had Sanderlings, a Dunlin, and an unidentified shorebird for a brief period at Clam Lagoon his afternoon (while we were in town getting gas!). He thinks it possibly could be a Broad-billed Sandpiper, but he was unable to get close and his photos of it are poor at best. He sent the photos to some shorebird experts. So the verdict is not yet in. We will certainly be scouring the flats tomorrow!

Here is a combination you don’t see every day… 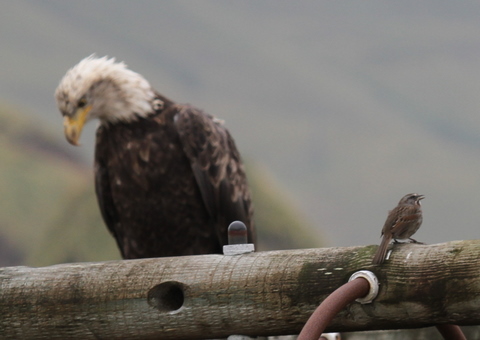 And for the over-sixty crowd… 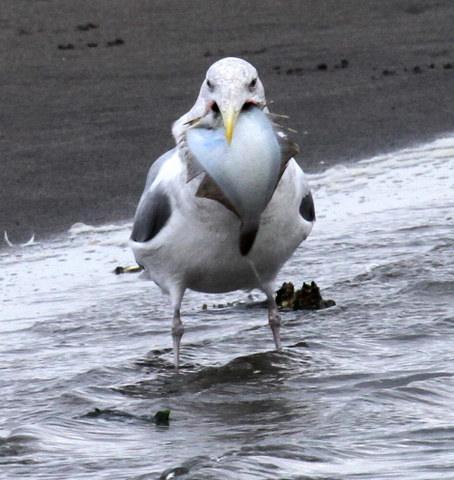 Want to see my flounder?

We are still waiting for some more Asian visitors. This nice weather just doesn’t cut it.

We mentioned the Rock Ptarmigans in an earlier post. We are now seeing them every day.

The highlight of the day was a most-cooperative Gyrfalcon. Although he flushed from the post on which he was sitting when I got out of the car to try to get a photo, he obligingly circled back and cruised leisurely overhead, affording the following pics (it was hard to pick just one!). 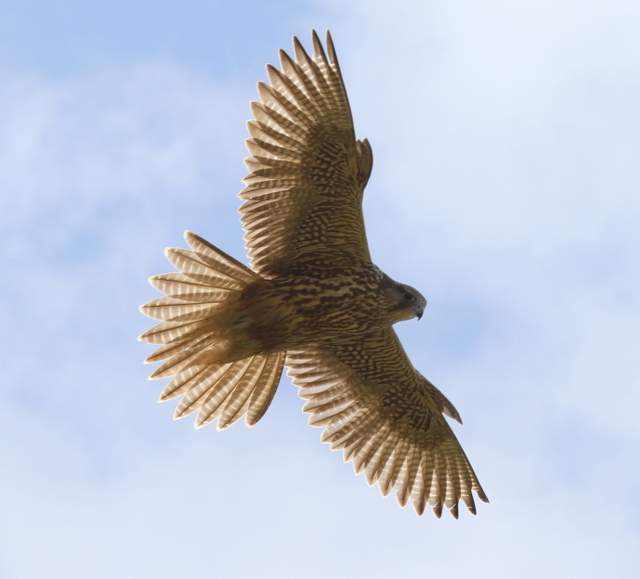 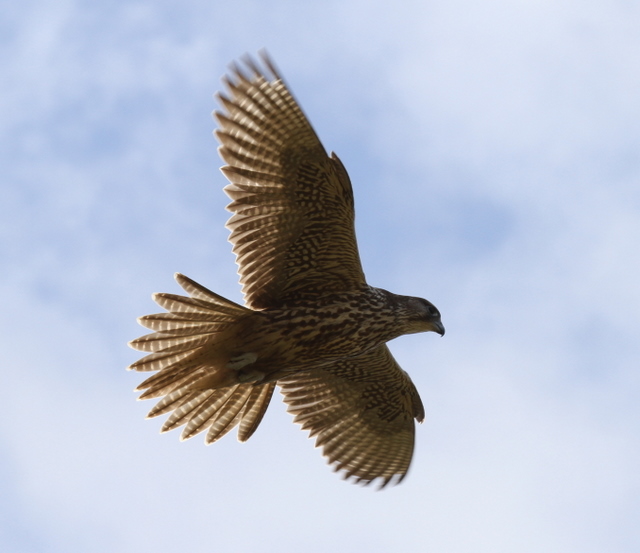 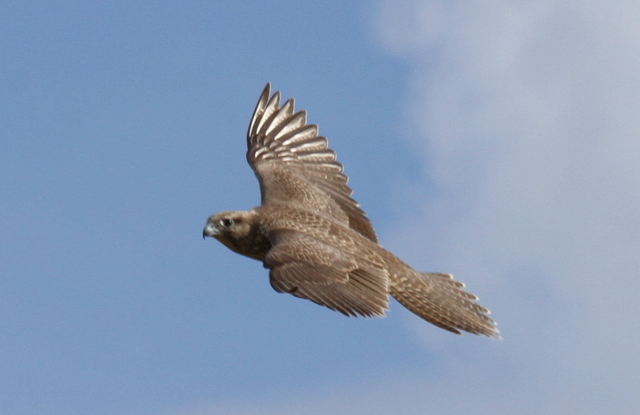 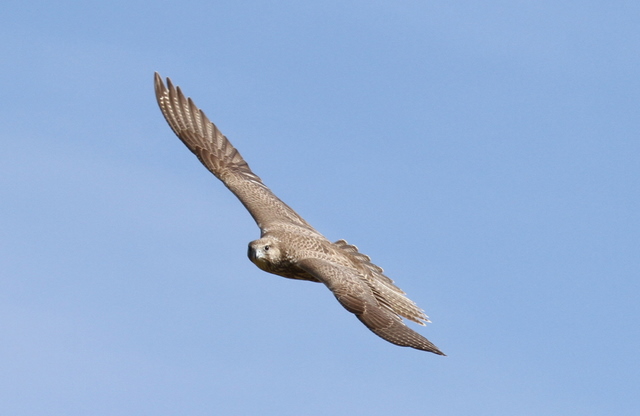 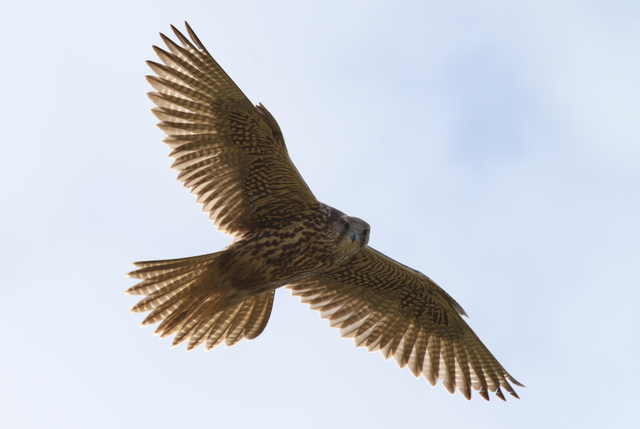 The only shorebirds today were Oystercatchers, Turnstones, and Rocks.

PS: When we recounted the first week’s summary, we forgot to mention that Frank had two lifers, not just one; Black-footed Albatross. How soon we forget…

More waterfowl are moving in. We had more Pintails, Eurasian Wigeon, and Black Scoters. Had our first Shovelers of the trip. Also, three more Emperor Geese. 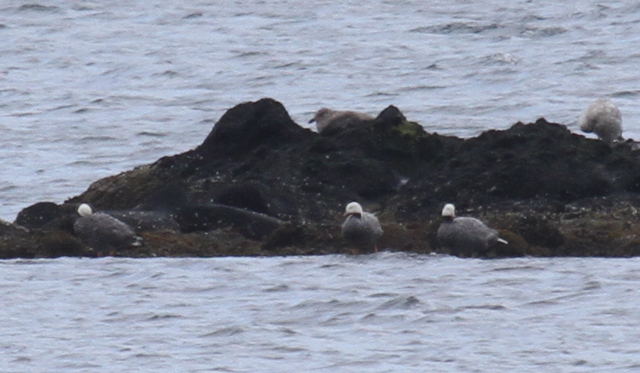 Shorebirds are scarce and no “funny-looking” passerines. Only three-and-a-half days to go.

Waiting for the next wave…

No lifers, but added a few trip birds. The first Eurasian Wigeon of the season and a flock of Emperor Geese (also first of the season).

A Pectoral Sandpiper at Lake Jean, posed nicely for us. 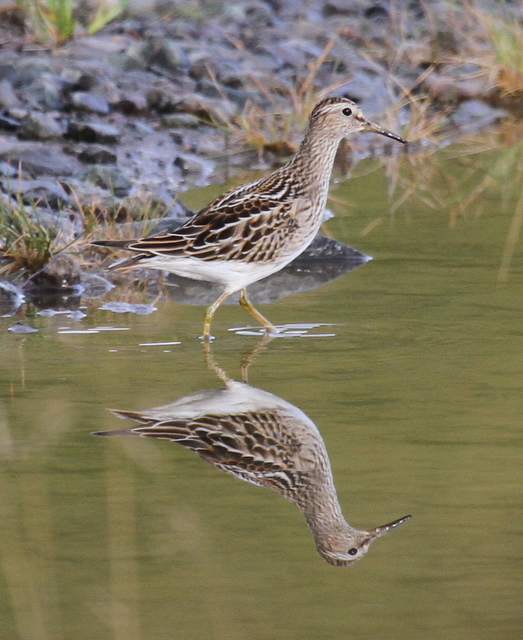 Had some more Ruddy Turnstones and Rock Sandpipers. You may be wondering why Ruddy and not Black. Although Black Turnstones nest north of the Aleutians in Alaska, there are only two records for the entire Aleutian chain! I guess they don’t like crossing the Bering Sea.

And last, but certainly not least, we finally had a cooperative Peregrine Falcon. 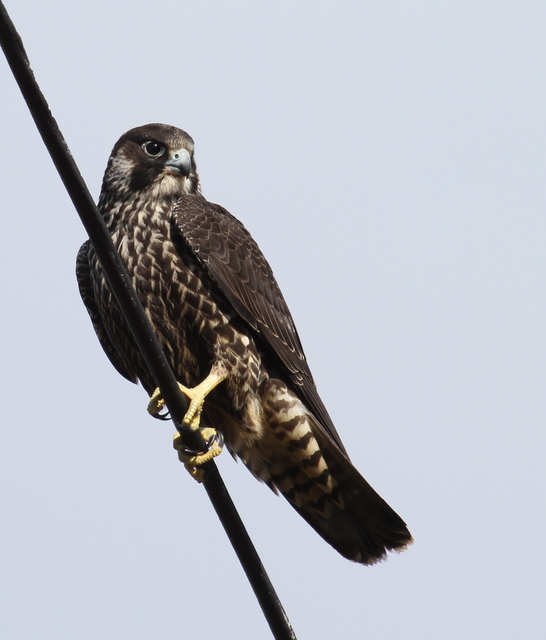 No new birds. Frank did not walk the lagoon today (trying to give his little toe a rest! He believes it is broken). 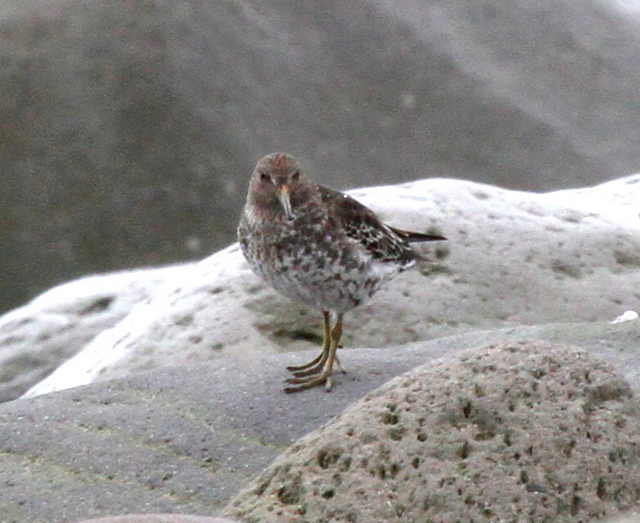 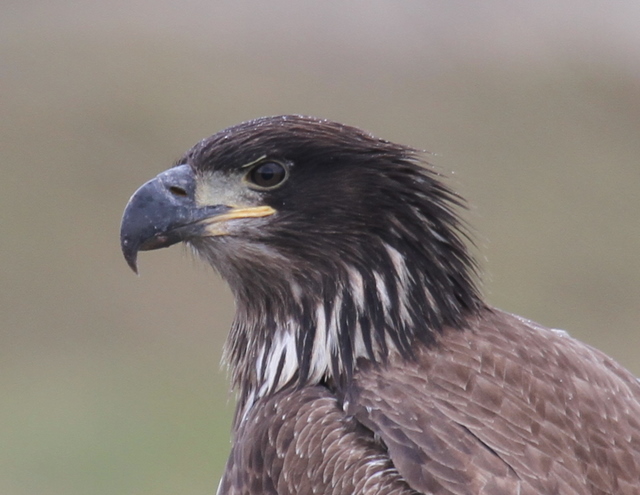 The first half of our trip was pretty good.

One lifer (Little Stint) and several semi-lifers. A semi-lifer is a bird that falls into one or more of the following categories:

Today was very windy, but partly sunny. After checking Sweeper Cove and other points south, we headed up to Clam Lagoon. The only new bird there was a lone Black Scoter. 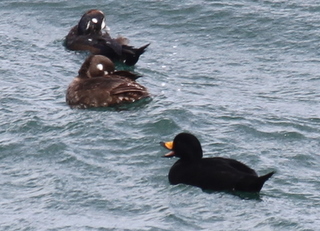 While going past Lake Shirley, a Peregrine swooped at a couple of Bald Eagles and Frank got a few photos of the bird. 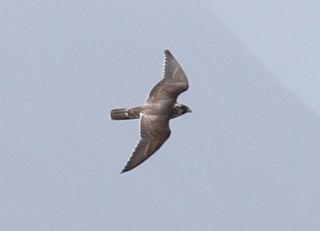 With the winds out of the north, Frank walked the edge of Clam Lagoon from north to south (duh!). The Ruff and a couple of Pectoral Sandpipers were there, but there was no Stint on the peninsula.

As Frank was walking the edge, a Peregrine flew by and was promptly pursued by two Parasitic Jaegers (2 of the 3 we saw today).

The forecast is for north and northwest winds the next few days, so prospects are good.

The “Japonicus” American Pipit that Isaac reported the other day turned out to be an American race after he studied his photos.

Re: the Vega Gull. Several trips ago, while at the same spot (the fish factory outflow), I was fifty yards up the shore photographing Harlequin Ducks when Barb spotted a darker-backed gull in the gull flock. By the time I got back to the car, the bird was gone and I never saw it. She was confident that it was a Vega. So this trip’s bird was new for Frank, but not for Barb.

Sweeper Cove and Kuluk Bay were like glass. It was very easy to pick out alcids, etc. on the water, but because it was so peaceful, there weren’t many.

However, we did see our first Black Oystercatcher of the trip on one of the rocky islands just off shore.

By the time we got up to Clam Lagoon in late morning, it was still calm. We spotted a shorebird nestled against the edge of the marsh, so Frank decided to walk the edge again to see what was there.

The bird turned out to be the Ruff hanging out with a Pectoral Sandpiper.

A few other shorebirds of undetermined species flushed along the way and back into the marsh. 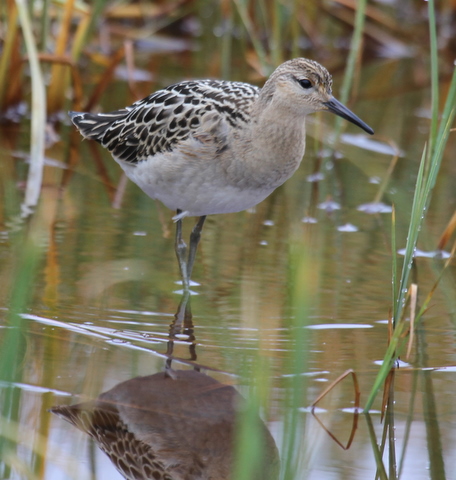 As Frank got near the north end of the marsh, it began to rain, so he did not go out the peninsula to see if the stint was still there.

Along the seawall, we saw more Horned Grebes, our first Common Loon of the trip, and five Rock Sandpipers flew by (our largest count for the trip).

The bay was calm and a lot of birds were feeding there, but nothing out of the ordinary.

When we returned to town later in the afternoon, we went down to Sweeper Cove and drove over to the jetty. A lot of gulls had gathered at the fish processing plant outflow. This plant had been shut down the past few years, disappointing birders, as it attracted a lot of gulls. Well, it opened back up this summer, and a fishing boat had just arrived earlier in the afternoon and it was churning.

We studied the gulls and Barb soon picked out a darker-backed one. After a minute or two, frank finally found the one she was looking at and started taking pictures (what else?). It turned out to be a Vega Gull. This species is recognized by Europe, but is still considered a race of Herring Gull by the AOU. We’re counting it! 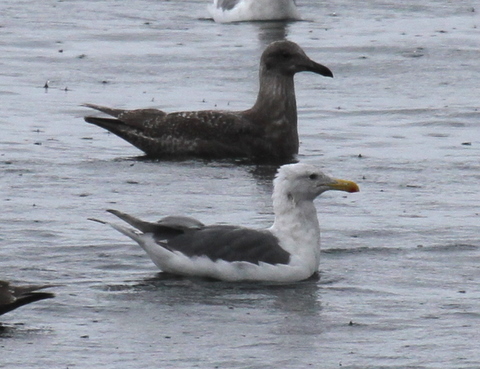 We headed back towards the house and stopped at the Bayshore Overlook for one last glance at the bay. We spotted a large swarm of shearwaters out in the bay heading north. We quickly drove north up to Palisades Overlook, hoping to catch them nearby, but apparently they took a right and headed back out to sea! Oh well, next time.

The weather forecast is for 25-40 mph winds tonight, gusting up to 60! Hope it brings some new birds.